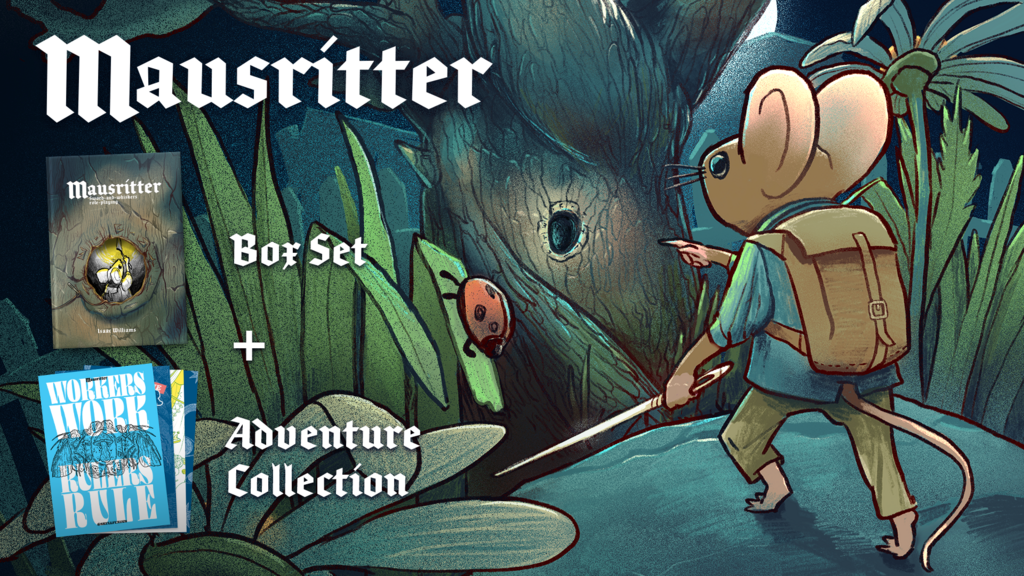 Latest Updates from Our Project:

Not a huge amount to report in this update, but wanted to let you all know where we're at and what we've been up to.

First off, thank you to everyone who has completed your Backerkit survey! That's now 87% of backers, from 967 cities around the world! If you haven't completed your survey yet, please do. And if you haven't received one, please let us know and we'll resend it.

Just a reminder too that if you missed the Kickstarter, or have friends who did, the preorder store is now open on BackerKit too.

We're still working away on finishing the adventure collection, collecting final art from the authors, and getting it all into the layouts. We've now completed the rough layout and edit passes of all of the ten adventures (barring the final stretch-goal adventure), and have received most of the final art from the creators, so now we're moving on to play-testing and polishing phase!

This week we've also locked in production dates with the factories that will be producing the books, adventures and boxes.

They'll be packing up the finished box sets and adventure collections in January, so we're still on track to deliver early next year.

Big news in this update!

First off, the BackerKit is now live. We've sent out surveys to all backers. 800 people have already answered, so lets keep it going. Please answer these promptly so we can make sure you get your rewards!

Important note: The GM Tracking Sheet will be included by default in the Box Set new printing — this addon is intended for people who have the first edition Box Set and want to complete it with the tracker. You don't need to add it to get it if you've backed the Box Set!

Secondly, we've had a few messages from people who missed the Kickstarter, but still want to get their paws on a Box Set or Adventure Collection. Good news! The BackerKit is also open as a preorder store to everyone, even if you didn't back the kickstarter! Check it out here.

We won a Gold ENNIE Award!

Finally, the Mausritter Box Set has won a Gold ENNIE Award for Best Family Game/Product! Thank you so much to everyone who voted, shared the word and supported Mausritter! We're so honoured and humbled to see all the love people have for this little game. It absolutely wouldn't have been possible without the amazing Mausritter community either. Big shoutouts to everyone who's been involved in creating Mausritter content, running jams, and generally making the community a great and welcoming place to be.

Just a quick update this week to let you know how things are moving along.

We've received funds from Kickstarter now, which means we can start things rolling into production!

We're also working hard along with Exalted Funeral to prepare the BackerKit. Once this is ready, we'll send out surveys to backers. This will work to collect your shipping details, or any extra add-ons that you may like.

The BackerKit will also be open to anyone as a preorder store. This means that anyone who missed the Kickstarter itself will still be able to easily get their paws on a copy of Mausritter or the Adventure Collection!

One fun thing about the trifold format is that each adventure is a little layout puzzle. Each one can be a bit unique, while also feeling like it's part of the whole. Tower of Soot really highlights this in it's departures from the usual formats we've established for the other adventures.

First off, it's looooong.

Secondly, it's able to use some different mechanics, departing from some of Mausritter's usual expectations. Because it's a heist format adventure, we're doing away with the usual Encounter table and instead replacing it with a timeline of events that keep the players on their toes and keep the action moving forward. We're also replacing the standard adventure hooks with something more akin to Blades in the Dark's engagement roll. This means players start off in the thick of the action, with something going wrong as soon as the session begins.

This one is going to be really fun, and I think will highlight some new techniques you can use for other adventures too!

First off, a massive thank you to everyone who has supported this project! I'm honestly a little bit overwhelmed by the love our little game has received. Now that the Kickstarter is over, we're hard at work to finish it off and deliver it to you all!

Spoilers ahead! Don't look closely at the images :)

I've been working this week on editing and making a rough layout pass of two of the Adventures in the Collection — Mush Rush by Bodie H., and The Chapel of Eternal Peace by Diogo Nogueira. These have now been edited and the trifold pamphlets laid out, so that they can be passed back to the author/illustrators for art.

With these two adventures edited and laid out, we now have 8 of the 11 adventures at this stage (or even more complete), with all the text written and edited, and ready for play-testing, art and a final edit pass.

We've also run a couple of playtest sessions this week, giving @gnarledmonster's Giant Snake Is In The Sewer a proper run though to make sure it plays smoothly and is lots of fun. This adventure is big, weird and funny, and blast to explore.

We'll be opening up a BackerKit online store in the next couple of weeks, so that you can supply your address for shipping, add to your existing pledge, or create a new pledge if you missed out on the Kickstarter.


That's it for this update! We'll be back soon with more.

What a journey this campaign has been. From the bottom of our hearts, we'd like to thank each and everyone one of you for making this campaign such a massive hit. We always believed that Mausritter was a marvelous game, but this response is mind-blowing. It's much more than we ever imagined and for that we are truly grateful.

The last Stretch Goal has been reached a few hours ago! The adventure collection will now come with several customized envelopes, so that players can store their character sheets and inventory cards at the end of each gaming session.

If you have any doubts, questions or concerns, please let us know and we will try to reply as soon as possible.